Since its inception in 2017 by Weaveworks, GitOps has caused quite some fuss on Twitter and KubeCon. This site aggregates the essence of GitOps to help clear up the confusion about the topic. 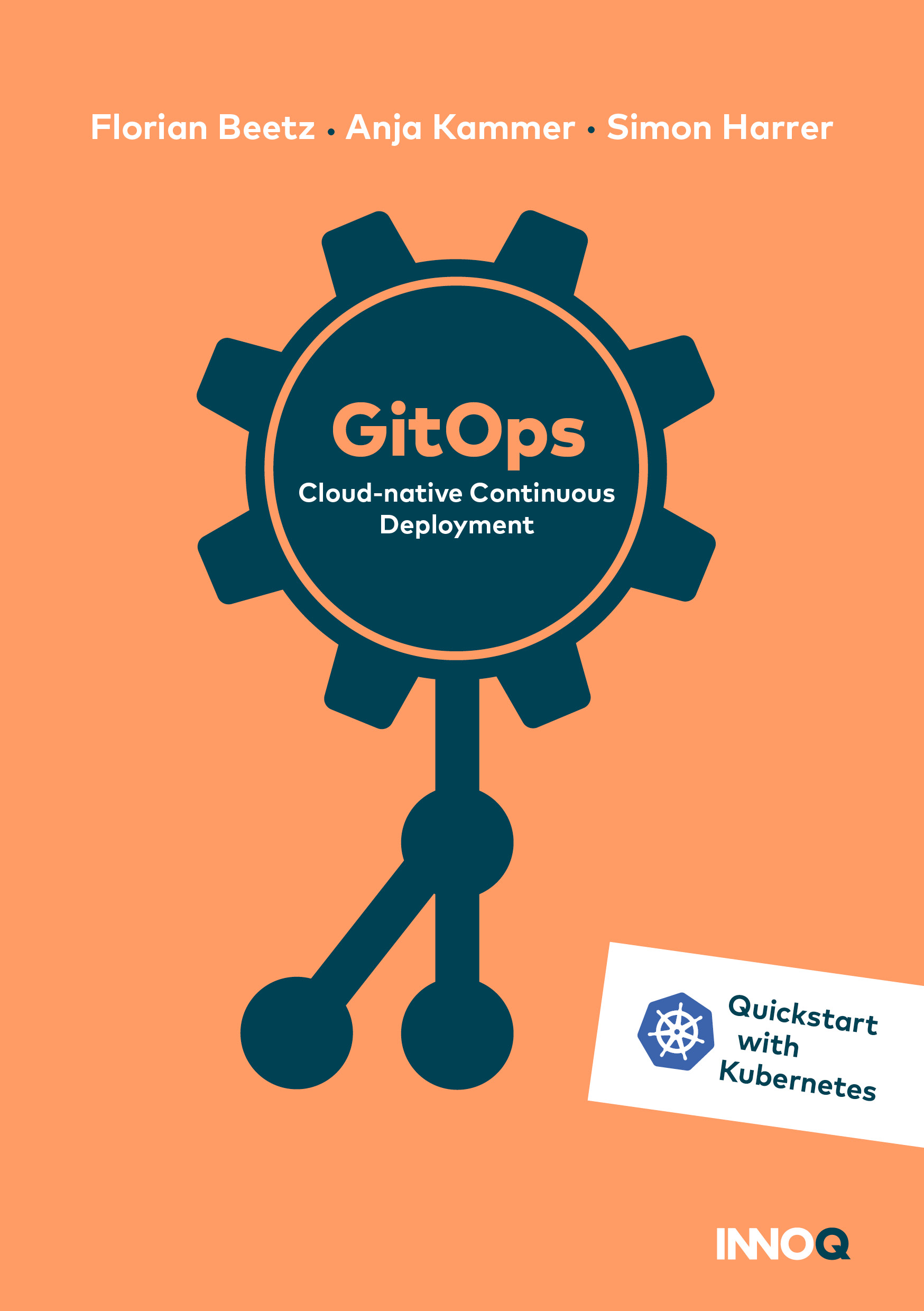 We’ve written a short book on GitOps. Get it as a free PDF or ePub, or for a small fee as a Kindle eBook or paperback.

The core idea of GitOps is having a Git repository that always contains declarative descriptions of the infrastructure currently desired in the production environment and an automated process to make the production environment match the described state in the repository. If you want to deploy a new application or update an existing one, you only need to update the repository - the automated process handles everything else. It’s like having cruise control for managing your applications in production.

Why should I use GitOps?

Okay, to be fair, probably every Continuous Deployment technology promises to make deploying faster and allows you to deploy more often. What is unique about GitOps is that you don’t have to switch tools for deploying your application. Everything happens in the version control system you use for developing the application anyways.

When we say “high velocity” we mean that every product team can safely ship updates many times a day — deploy instantly, observe the results in real time, and use this feedback to roll forward or back.

Oh no! Your production environment is down! With GitOps you have a complete history of how your environment changed over time. This makes error recovery as easy as issuing a git revert and watching your environment being restored.

The Git record is then not just an audit log but also a transaction log. You can roll back & forth to any snapshot.

kubectl is the new ssh. Limit access and only use it for deployments when better tooling is not available.

Have you ever SSH’d into a server and wondered what’s running there? With GitOps, every change to any environment must happen through the repository. You can always check out the master branch and get a complete description of what is deployed where plus the complete history of every change ever made to the system. And you get an audit trail of any changes in your system for free!

Using Git to store complete descriptions of your deployed infrastructure allows everybody in your team to check out its evolution over time. With great commit messages everybody can reproduce the thought process of changing infrastructure and also easily find examples of how to set up new systems.

GitOps is the best thing since configuration as code. Git changed how we collaborate, but declarative configuration is the key to dealing with infrastructure at scale, and sets the stage for the next generation of management tools.

How does GitOps work?

There are two ways to implement the deployment strategy for GitOps: Push-based and Pull-based deployments. The difference between the two deployment types is how it is ensured, that the deployment environment actually resembles the desired infrastructure. When possible, the Pull-based approach should be preferred as it is considered the more secure and thus better practice to implement GitOps.

Tip: You can also just store templates of the YAMLs in the application repository. When a new version is built, the template can be used to generate the YAML in the environment configuration repository.

Changes to the environment configuration repository trigger the deployment pipeline. This pipeline is responsible for applying all manifests in the environment configuration repository to the infrastructure. With this approach it is indispensable to provide credentials to the deployment environment. So the pipeline has god-mode enabled. In some use cases a Push-based deployment is inevitable when running an automated provisioning of cloud infrastructure. In such cases it is strongly recommended to utilize the fine-granular configurable authorization system of the cloud provider for more restrictive deployment permissions.

Want to see how to set it up? Check out Google’s Tutorial on how to set up Push-based deployments with their Cloud Builds and GKE.

The Pull-based deployment strategy uses the same concepts as the push-based variant but differs in how the deployment pipeline works. Traditional CI/CD pipelines are triggered by an external event, for example when new code is pushed to an application repository. With the pull-based deployment approach, the operator is introduced. It takes over the role of the pipeline by continuously comparing the desired state in the environment repository with the actual state in the deployed infrastructure. Whenever differences are noticed, the operator updates the infrastructure to match the environment repository. Additionally the image registry can be monitored to find new versions of images to deploy.

This change in direction solves the problem of push-based deployments, where the environment is only updated when the environment repository is updated. However, this doesn’t mean you can completely do without any monitoring in place. Most operators support sending mails or Slack notifications if it can not bring the environment to the desired state for any reason, for example if it can not pull a container image. Additionally, you probably should set up monitoring for the operator itself, as there is no longer any automated deployment process without it.

The operator should always live in the same environment or cluster as the application to deploy. This prevents the god-mode, seen with the push-based approach, where credentials for doing deployments are known by the CI/CD pipeline. When the actual deploying instance lives inside the very same environment, no credentials need to be known by external services. The Authorization mechanism of the deployment platform in use can be utilized to restrict the permissions on performing deployments. This has a huge impact in terms of security. When using Kubernetes, RBAC configurations and service accounts can be utilized.

Want to see how to set it up? Check out our Tutorial about setting up Pull-based GitOps on Google’s GKE with WeaveWorks Flux.

Working with Multiple Applications and Environments

Of course working with just one application repository and only one environment is not realistic for most applications. When you are using a microservices architecture, you probably want to keep each service in its own repository.

GitOps can also handle such a use case. You can always just set up multiple build pipelines that update the environment repository. From there on the regular automated GitOps workflow kicks in and deploys all parts of your application.

Managing multiple environments with GitOps can be done by just using separate branches in the environment repository. You can set up the operator or the deployment pipeline to react to changes on one branch by deploying to the production environment and another to deploy to staging.

Is my project ready for GitOps?

Most likely: Yes! The cool thing about GitOps is that you don’t need to write any code differently. All you need to get started is infrastructure that can be managed with declarative Infrastructure as Code tools.

I don’t use Kubernetes. Can I still use GitOps?

Yes! GitOps is not limited to Kubernetes. In principle, you can use any infrastructure that can be observed and described declaratively, and has Infrastructure as Code tools available. However, currently most operators for pull-based GitOps are implemented with Kubernetes in mind.

Is GitOps just a new name for Infra as Code?

No. Declarative Infrastructure as Code plays a huge role for implementing GitOps, but it’s not just that. GitOps takes the whole ecosystem and tooling around Git and applies it to infrastructure. Continuous Deployment systems guarantee that the currently desired state of the infrastructure is deployed in the production environment. Apart from that you gain all the benefits of code reviews, pull requests, and comments on changes for your infrastructure.

How to get secrets into the environment without storing them in git?

First of all, never store secrets in plain text in git! Never!

Another approach is to add a private key once to the environment (probably by someone from a dedicated ops team) and from that point you can add secrets encrypted by the public key to the environment repository. There’s even tool support for such sealed secrets in the K8s ecosystem.

How does GitOps Handle DEV to PROD Propagation?

GitOps doesn’t provide a solution to propagating changes from one stage to the next one. We recommend using only a single environment and avoid stage propagation altogether. But if you need multiple stages (e.g., DEV, QA, PROD, etc.) with an environment for each, you need to handle the propagation outside of the GitOps scope, for example by some CI/CD pipeline.

We are already doing DevOps. What’s the difference to GitOps?

DevOps is all about the cultural change in an organization to make people work better together. GitOps is a technique to implement Continuous Delivery. While DevOps and GitOps share principles like automation and self-serviced infrastructure, it doesn’t really make sense to compare them. However, these shared principles certainly make it easier to adopt a GitOps workflow when you are already actively employing DevOps techniques.

So, is GitOps basically NoOps?

You can use GitOps to implement NoOps, but it doesn’t automatically make all operations tasks obsolete. If you are using cloud resources anyway, GitOps can be used to automate those. Typically, however, some part of the infrastructure like the network configuration or the Kubernetes cluster you use isn’t managed by yourself decentrally but rather managed centrally by some operations team. So operations never really goes away.

In a way, yes. In principle, you can use any version control system you want. One of the core ideas of GitOps is letting developers use the tools they are familiar with to operate your infrastructure. If you prefer SVN over Git, that’s cool! However, you may need to put more effort into finding tools that work for you or even write your own. All available operators only work with Git repository — sorry!

Should I hire GitOps engineers for my team now?

No! There are no GitOps engineers. GitOps is not a role (and neither is DevOps). GitOps is a set of practices. You can look for a developer who has experience practicing GitOps — or simply let your developers try out those practices.

Florian Beetz is currently studying International Software Systems Science at University of Bamberg. He is interested in cloud computing, clean code, and software engineering techniques. In his free time, he likes to go rock climbing.

Anja Kammer is a consultant at INNOQ and creates cloud-native web applications. She deals with deployment automation and CI/CD systems in particular. Her focus is on the topics DevOps, cloud infrastructure and Kubernetes. In her spare time, she develops an open-source cloud-native CI/CD system for Kubernetes called anya.

Dr. Simon Harrer is a curious person working at INNOQ who likes to share his knowledge. He’s a serial co-author of Java by Comparison, Remote Mob Programming, GitOps, and, most recently, Data Mesh.